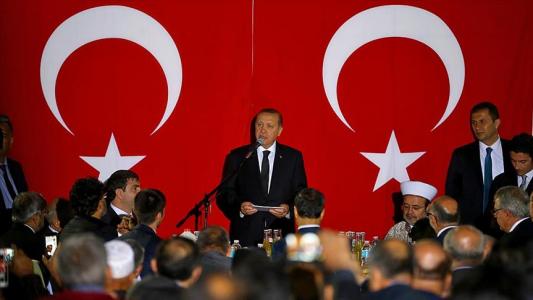 In full interview with Israel's Channel 2, Turkish President Recep Tayyip Erdoğan speaks of Israel and Turkey's reconciliation, the 2010 Mavi Marmara crisis and his relations with Hamas.

Just a week after Israel and Turkey resumed full diplomatic ties by mutually naming new ambassadors, Turkish President Recep Tayyip Erdogan sounded anything but conciliatory in an interview aired Monday in which he refused to back down from comments equating Israel's actions in Gaza in 2014 with Nazi atrocities.

Erdogan, in an interview with Ilana Dayan of Channel 2's "Uvda" program, was asked whether he regretted those remarks.

Be the first to know - Join our Facebook page.

Instead of walking back his his previous statements comparing Hitler and Israel's actions in the 2014 conflict with Hamas in Gaza, Erdogan deflected the conversation from the reference to the systematic murder of more than six million Jews by the Nazis to the Palestinian death count in Operation Protective Edge.

"There is no point in comparing and asking who is more barbaric," he concluded.

Erdogan said that Israel killed thousands of people in “Gaza and Palestine,” and repeated what he told late president Shimon Peres at Davos in 2009, that “you know very well how to kill.”

When it comes to Hamas, Erdoğan stated that he doesn't believe that they are a terrorist organization.

Instead, he called Hamas a "political movement born from the national resurrection."

Erdoğan added that one day Fatah and Hamas will need to work together in order to achieve true peace in the region, as previous talks have failed.

Erdoğan admitted that he meets with Hamas "all the time." "In this regard I'm very open, I have no hidden agenda," he stated.

His ultimate desire he said, is peace for the region.

Erdogan, who faces allegations of impeding on democratic process in his country, particularly with the arrests of tens of thousands in the wake of a failed coup against him in July has brushed off accusations of being dictator. The Turkish president told Channel 2 that what he despises most in politics are "lies."

The Erdogan interview was combative at times, especially when Erdoğan was questioned by Israeli journalist Ilana Dayan about the Gaza-bound Turkish flotilla vessel that was raided by Israeli Naval commandos.

In the 2010 incident, a group of human rights activists and a smaller group of IHH activists (which the quasi-government Turkel Commission Report identified as affiliated with the Muslim Brotherhood) boarded several ships to try to break Israel’s blockade of the Gaza Strip.

While Israel commandeered and stopped most of the ships without incident, the Israel Navy commandos boarded the Mavi Marmara. IHH activists then attacked them, leading to some commandos being wounded and, eventually, 10 deaths on the IHH side.

While the Israeli marines said they had acted in self defense, Turkey and many others in the international community accused Israel of war crimes and prolonged legal battles ensued.

Erdoğan said that the claims made by Israeli commandos about violence by those aboard the ship were "all lies."

"They cannot be believed," Erdoğan said, "we have all the documents to prove it."

Erdoğan added that "I have seen everything," attacking Dayan "you cannot speak the truth, the fact that you are a journalist does not mean you have to lie, if you think you can pressure Recep Tayyip Erdoğan into a corner you are mistaken."