Skip to main content Skip to search
Secondary menu
Home » 'Be polite, be professional, but have a plan to kill everybody you meet'

'Be polite, be professional, but have a plan to kill everybody you meet' 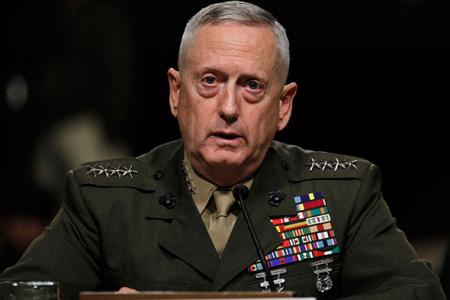 By MICHAEL WILNER
'Be polite, be professional, but have a plan to kill everybody you meet'
Analysis: Marine Gen. James Mattis would be conventional voice in the White House.

As former head of US Central Command (CENTCOM), Mattis pioneered America’s counterinsurgency strategy, adapting marine and army tactics to the sort of asymmetric warfare that has come to define their operations in Middle East theaters. His involvement in this strategic evolution demonstrates his adaptability. But in his efforts to change the military with the times, Mattis has remained well within the mainstream of Washington’s national security consensus – identifying an axis of illiberal powers as America’s primary threats, in contrast to Trump’s worldview.

Trump is now considering Mattis, nicknamed “Mad Dog” by those who know him, to be his first secretary of defense. He would be a traditional voice in the cabinet – an exception in this particular administration – if he gets the job.

On Middle East peace, Mattis believes Israel’s current dynamic with the Palestinians is “unsustainable” and settlement activity is slowly eroding at the prospects for a two-state solution to the conflict. It is a position that has long been held by Democrats and Republicans, but one the GOP is slowly moving away from, and one that Trump’s inner circle largely rejects.

“It’s got to be directly addressed,” Mattis said at an Aspen Security Forum in Colorado in 2013, warning that Israel risked becoming an “apartheid” state should the status quo continue. “We have got to find a way to make the two-state solution that Democrat and Republican administrations have supported. We’ve got to get there, and the chances for it are starting to ebb because of the settlements.

“I paid a military security price every day as the commander of CENTCOM because the Americans were seen as biased in support of Israel,” he continued, “and that moderates, all the moderate Arabs who want to be with us, because they can’t come out publicly in support of people who don’t show respect for the Arab Palestinians.”

While Central Command’s region of responsibility encompasses most of the Middle East, Israel actually falls within European Command – and thus not in Mattis’s former area of duty.

Mattis’s position is lauded by two-state lobby J Street, whose leadership tweeted on Sunday that Republicans have gone astray of this bipartisan consensus view. The Republican Party Platform, adopted in Cleveland over the summer, removed mention of a two-state settlement to the decades-old conflict.

Israel is not the only issue on which Mattis disagrees with the president-elect. In an op-ed published just three months ago, the retired general characterized Russia as a “predatory” state and warned that its encroachment on its neighbors should be taken more seriously – not less – by Washington.

And while Trump appears willing to partner with Syria’s nominal president, Bashar Assad, who has presided over a bloodbath of a civil war there with Russian and Iranian support, Mattis has called Assad “murderous” and a linchpin in Tehran’s quest to create a Shi’a crescent across the Middle East.

“Every morning I woke up and the first three questions I had had to do with Iran, and Iran, and Iran,” Mattis told the Center for Strategic and International Studies in April. “It remains the single most belligerent actor in the Middle East.”

He characterized the Iran nuclear accord as a flawed deal that, at the time, offered the lesser of two evils: “It came down to two options,” Mattis described. “There was the military option – probably could’ve delayed them for a year or two before we would’ve had to take additional military action – or there was the diplomatic option, where they were aiming to delay it much longer.”

Should Trump tap Mattis to lead the Pentagon, he would thus be appointing a conventional foreign policy voice who is subtly skeptical of the Iran deal, aggressively opposed to Assad, fearful of a burgeoning Russia and critical of Israeli settlement activity – all positions that diverge him from the president-elect.

And yet if Trump is looking for established figures in defense or diplomacy who align with his worldview – that Assad and Russian President Vladimir Putin are partners, that the nuclear deal can be shred with haste – he is likely to find a thin bench. His praise for Mattis may not be of his policy ideas, but of his popularity, his successes on the battlefield and his willingness to target Islamists with tremendous force.

Preparing Marines for asymmetrical battle in Iraq in 2003, Mattis offered the sort of advice that was Trumpian in tone.
“Be polite, be professional,” he said, “but have a plan to kill everybody you meet.”
http://www.jpost.com/Us-Elections/Donald-Trump/Be-polite-be-professional-but-have-a-plan-to-kill-everybody-you-meet-473195