Erdoğan is right: Turkey should vote on EU membership 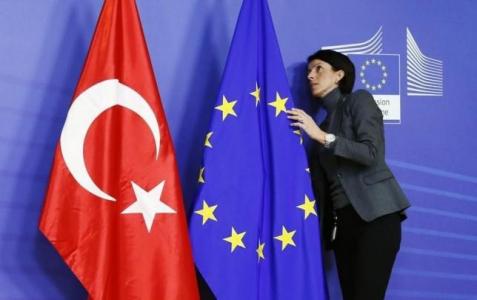 The birth of the modern state in the Islamic world has brought with it an eternal casus belli: Should the state be based on man-made laws or divine law? That question has been at the heart of decades-long ideological wars in Muslim lands. Turkey is no exception.

In the early years of his political career, President Recep Tayyip Erdoğan proudly said “A Muslim man cannot be secular,” and “If the nation wants it [secularism] to go away, it will go away.” Little has changed since then, in the psyche of Turkish Islamists.

Only a few months ago, Parliament Speaker İsmail Kahraman suggested that lawmakers should draft a “religious” constitution so that the secular ethos of the charter goes away. Turkey’s laws may still be secular in theory, but law enforcement and having an independent (from the ruling ideology) judiciary are totally different matters.

A few days after he portrayed Belarus as “a country where people from different roots live in peace,” Mr. Erdoğan once again revisited his rhetoric that “if parliament reinstated the death penalty I would rush to confirm it.” He also remembered to add some “Islamist” flavor to his now enriched rhetoric: “What matters about the death penalty is what my nation wants. The only authority in crimes committed against individuals rests with the victim’s heirs. We don’t care about what Hans or George says. We care about what God says.”
What he thinks about capital punishment is little different from his opinion on how “a Muslim man cannot be secular.” Mr. Erdoğan is apparently on the side of divine law, rather than man-made laws. What he suggests is based on Quranic laws as the foundation of a modern state, rather than man-made universal laws.

For example, if Mehmet kills Ahmet but Ahmet’s relations pardon Mehmet in return for a sum of money, then Mehmet should not stand trial. If that is “what our nation wants,” and most probably it is, then so be it. It was not a coincidence that the parliament speaker suggested a “religious” constitution. It is the same old war: Should our country be based on man-made laws or on divine law?

It is not a secret that Mr. Erdoğan deeply despises Western Europe, its “infidel” culture, its treatment of its Muslim minorities, its “man-made” laws, its democratic culture and its institutions. Why then should his country, which increasingly tends to incline toward divine law, be a member of the hostile “infidel” club whose culture it despises?

Mr. Erdoğan may think that Turkey - with its divine law and religious constitution, potentially including the death penalty, but also with its “nuisance value” - could one day become a full member of the European Union. He is wrong. But he is right to suggest that EU membership should be put to popular vote in Turkey.

He has not said whether he would campaign for a “yes” or a “no,” but this would not be too difficult to guess.

The EU is not a club based on divine law. It is also not Belarus, “where people from different roots live in peace.”

Turkey’s identity crisis is too persistent to disappear, even after decades of soul-searching, Turkey is too Islamic to belong to Europe, too secular and non-Arab to belong to an Islamic club, too Sunni to find a seat in any Shia Muslim club, too Turkish to find allies in a Eurasian pact, and too alien to find meaningful African alliance.

The Turkish-European opera buffa has become an increasingly boring, unpleasant and a crude theater. It is not even funny. A final act, featuring a Trexit referendum, may put an end to years of torment among the audience.