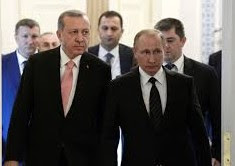 Moreover, I do not know if it is true that Moscow warned the President of Turkey of the coup, and I do not know if Washington was behind the coup. Therefore, I do not know how to weigh the scales. As I see it, whether Turkey stays with Washington or realigns with Moscow depends first of all on whether or not Moscow warned Turkey and whether or not Washington was behind the coup. If this is what Erdogan believes, whether true or false, Erdogan is likely to align with Russia. However, other factors will also influence Erdogan’s decision. For example, Erdogan’s belief about how resolute Putin is to standing up to Washington.

Erdogan will not want to align with Russia if he thinks Russia is not up to Washington’s challenge. Erdogan sees Putin endlessly asking for Washington’s cooperation, and Erdogan understands that Washington sees this as a sign of Russian weakness. Washington slaps Putin in the face, and Putin replies by asking for cooperation against ISIS. I understand why Putin responds this way. He wants to avoid a war between US/NATO and Russia that neither side can win. Putin is a man of peace and accepts affronts in order to save life. This is admirable. But that might not be the way Erdogan sees it. Erdogan might see it like Washington sees it: weakness.

The second consideration is whether Washington or Moscow offers Erdogan the best deal. Washington most certainly does not want the breakup of NATO and will strive to keep Turkey in NATO at all costs. Washington, for example, might deliver Gulen to Erdogan, and Washington might put one billion dollars in a bank account for Erdogan. This is easy for Washington to do, as Washington can print all of the world’s reserve currency it wishes to print. It is impossible for Moscow to deliver Gulen, and because Yeltsin accepted US advice conveyed through the IMF, the Russian ruble is not a substitute for the US dollar.

The world is accustomed to seeing Washington prevail, because Washington relies on force. Except for Putin’s response to the Georgian attack on South Ossetia, the world is accustomed to seeing Putin rely on diplomacy. As Mao said, power comes out of the barrel of a gun, and so the world believes. Putin seemed to be decisive when he accepted the Crimean vote and reunited the Crimea with Russia, But Putin turned down the requests of the breakaway republics of Donetsk and Luhansk to rejoin Russia, and this made Russia look weak. It also prolonged the conflict and the death and destruction continues.

In my opinion this strategic failure by Putin is the result of advice from the Russian “Atlanticist Integrationists”—the people who think that Russia does not count unless it is part of the West. In every sense, these pro-Western members of the Russian government are de facto members of the Treason Party. Yet they serve as a constraint on Russian decisiveness. The absence of Russian decisiveness provokes more pressure from Washington. It is a losing game for the Russian government to invite pressure from the West.

Washington sees that Putin is unable to break away from the influence of the Atlanticist Integrationists, which includes the Russian economic establishment led by the independent central bank. Therefore, Washington continues to make Washington’s cooperation with Russia in Syria dependent on Putin’s agreement that “Assad must go.” Putin wants to get rid of ISIS, because ISIS can infect Muslim areas of the Russian Federation. But if he agrees to get rid of Assad, chaos will prevail in Syria just as chaos prevails in Iraq and Libya, and Russia will have accepted Washington’s overlordship. Russia will become another vassal country added to Washington’s collection.

The real danger for Russia lies in Russia’s desire for Western acceptance. As long as Russians have this desire, they are a doomed people.