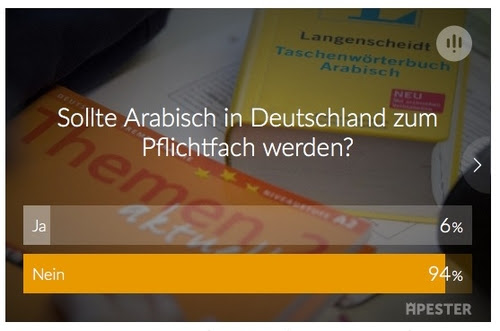 by Daniel Pipes
Cross-posted from National Review Online, The Corner

"Hugh Fitzgerald" posted a 3,300-word piece at JihadWatch.com responding to a news item about Thomas Strothotte, president of Kühne Logistics University in Hamburg, Germany, advocating that all school children learn Arabic until 12 or 13 years of age; Fitzgerald called this a sign of "civilizational surrender."

But I went to the source of the news item in Die Welt and tweeted the news item in exactly the opposite way, noting that 94 percent of respondents answered negatively to a straw poll asking, "Should the Arabic language become a compulsory subject in Germany?" ("Sollte Arabisch in Deutschland zum Pflichtfach werden?")

"Should the Arabic language become a compulsory subject in Germany?"
That the mildly-conservative Welt-reading public with near-unanimity rejected Strothotte's suggestion seems to me far more newsworthy than the original suggestion.

More neatly than anything else I can think of, this contrast between Fitzgerald's and my reporting points to the divergence between two fundamentally different ways of seeing the West's evolution vis-à-vis Islamism: one focuses on the statements and actions of a diminishing elite appeasement faction; the other follows the increasingly strong negative response by the population at large.

Yes, Islamism is making advances. But anti-Islamism is growing more rapidly and so, I predict the latter will prevail. (August 26, 2016)