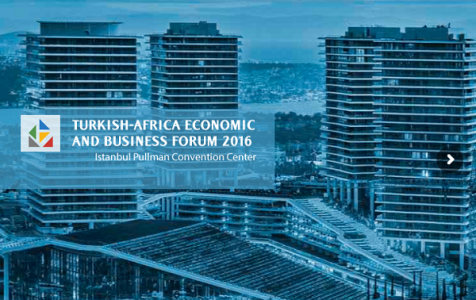 Turkish officials have expressed strong interest in boosting economic and trade relations with Africa at a key joint forum in Istanbul, where their African counterparts welcomed the call.

“We have always regarded our African friends as our brothers. Our policy of opening up to Africa is not just the reflection of a transient political and economic expectation. On the contrary, it is the product of a process with strong historical and cultural aspects,” Turkish Economy Minister Nihat Zeybekci said Nov. 2 at the Turkey-Africa Economic and Business Forum.

“One of the main constituents of our comprehensive interest in Africa is composed of economic and trade relations. In this vein, we signed trade and economic cooperation agreements and created mixed economic commission mechanisms with a total of 40 African countries so far. We have embassies in 39 African countries, but this is not enough for us. Our desire is to open embassies across the whole continent,” said Turkish President Recep Tayyip Erdoğan at the meeting.

He also noted that business councils had been established in 33 African countries under DEİK’s leadership.
“While our trade with Africa was around $7 billion in 2005, this figure surged to $17.5 billion in 2015. Our trade volume with sub-Saharan Africa soared to $6.6 billion in 2015 from around $2.7 billion in 2005. I should also mention our investors’ strong interest in Africa,” Erdoğan said, adding that Turkey had given significant priority to all issues regarding African countries in all international platforms.

Zeybekci said Ankara started an expansion into Africa to strengthen cooperation 12 years ago, while also calling for African countries to make 2017 a year of free trade.

“Taking and then leaving has never been our policy. What we do in Africa is to build together, produce together, sell what’s produced together and share the profit,” he added.

“Also we are opening a gateway to Africa as Turkish Airlines flies to the highest number of destinations in Africa,” said the minister.

Zeybekci noted that Turkey would provide numerous opportunities to African countries through its economy and its position linking Asia and Europe.

“The Turkish economy is the 18th largest in the world, seventh largest in Europe and a member of the G-20. We have free-trade agreements with 23 countries around the world. We would like to share our abilities with our African brothers because we believe in Africa,” he said.

Zeybekci said the world economy had been in recession for almost 10 years, but suggested there could be a win-win deal for all. “It is not just about selling to Africa, it is also about buying from Africa. I am inviting you to turn 2017 into a free-trade year. Let’s start this campaign immediately,” he added.

DEİK President Ömer Cihad Vardan called for African officials and businesspeople not to work with any business organizations that are connected to the Gülen movement, which is the main suspect in the July 15 coup attempt in Turkey.

“They will cause harm rather than bringing in any benefit,” he said, adding that DEİK was ready to offer any assistance and help to African businesspeople as Turkey’s authorized organization to run the Turkish private sector’s foreign economic relations.

African officials noted that countries on the continent were ready to boost ties with Turkey.

“African countries believe that the private sector is the motor force of the economy and are improving their legal and administrative frameworks. As investment-friendly countries, we have been developing our energy, infrastructure and communications infrastructures. My message to Turkish companies is as follows: ‘Africa is ready to make business with Turkey. Both African countries and businesses are ready to take the required steps,’” said the head of the Pan-African Chambers of Commerce and the president of the Ethiopian Chamber of Commerce, Solomon Afework.

Antony Mothae Maruping, the commissioner for Economic of the African Union Commission, said Istanbul was a strategically key bridge that connects Turkey and Africa, adding that the trade volume between Turkey and Africa had surged to $20 billion in volume in the last decade from just around $4 billion.

“Africa has been improving its investment climate in line with its accelerated, stable and inclusive growth target, which has been envisioned in our Africa 2063 Agenda. The boosting Turkish-African cooperation is also compatible with our key agenda,” he added.

Over 1,500 African businesspeople attended the forum, according to officials. They and their Turkish counterparts are expected to hold bilateral meetings at 900 desks, which were set out as part of the forum.
November/02/2016