Turkey has European Union over a barrel 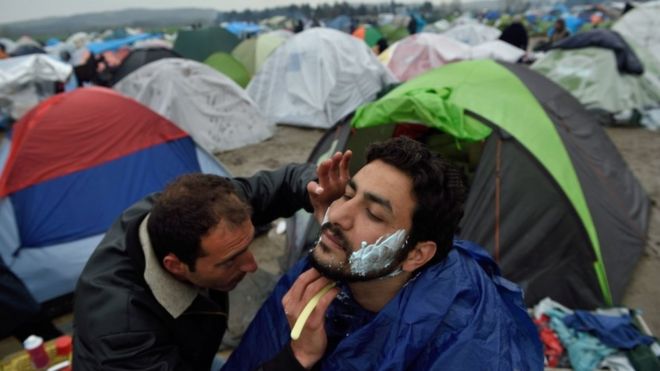 Even as people struggle and drown on the river border between Greece and Macedonia the proposed solution to Europe's migration crisis is dissolving before our very eyes.
European Council President Donald Tusk's invitation letter to the two-day summit in Brussels this week admits gloomily "the catalogue of issues to be resolved before we can conclude an agreement is long".
Turkey is the key, and Turkey is the lock. The youthful, populous, problematic Muslim country is a practical conundrum and an existential threat to the EU's self-definition, seen by some as the classic shadow image, the threat of the other.

Before I get carried away, it was obvious from the start that the deal was flawed, forced and bound to be opposed with vehemence.
Left and right, ancient and modern, north and south are joined in rebellion against Mrs Merkel and the planned EU deal with Turkey.
It is not so much snagged on a nail, fraying at the edges, as already unravelled before the summit, little more than a pile of wool lying on the floor. To pick up the threads and knit it into anything serviceable will be a painstaking labour of necessity.
Perhaps it has already done its job.
The EU does not thrive on surprises, and this deal came as a brutal shock. That in politics can be a masterstroke. But to be so it has to delight, rather than dismay, those who are taken unawares.
It was a cobbled-together plan that would reward Turkey for taking back every migrant who arrived on Greek shores from their country. 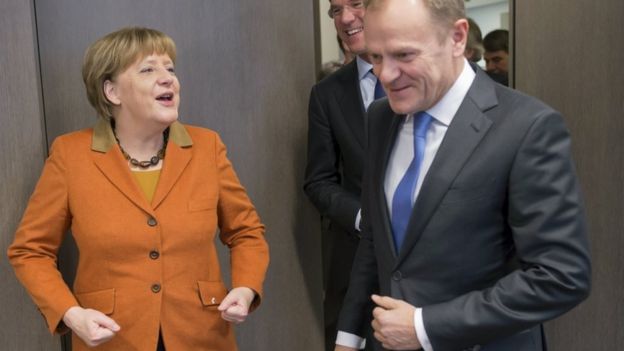 The deal was formulated by Angela Merkel and Donald Tusk
In return for each such desperate soul, another - apparently more deserving - would be taken from Turkey and sent to a willing European Union country.
Angela Merkel and her consigliere Donald Tusk strongarmed a deal ahead of German elections in which migration was a major issue.
While the elections were not exactly a triumph for the chancellor, they were also not quite the rout some of her opponents claim.
At least it looked for a short while that she had a road map out of crisis.
But only hours after the deal was done the UN declared that the policy could be illegal.
Spain will now champion this view at this week's summit, with the acting foreign minister declaring to El Pais: "Anyone arriving on European territory must have the right to individualised attention, to filing an asylum request that will be taken into consideration, and to appeal if the request is denied. Throughout this process, any possibility of expulsion is suspended."
It is hard to see how an organisation almost painfully conscious of its responsibility to international law can have extricated this particular spanner from this piece of work.
What is in the EU-Turkey proposal?
The EU leaders said "bold moves" were needed, and made the following proposals:
All new irregular migrants crossing from Turkey to Greece will be returned to Turkey. Irregular migrants means all those outside normal transit procedures, ie without documentation
In exchange for every returned Syrian, one Syrian from Turkey will be resettled in the EU
Plans to ease access to the EU for Turkish citizens will be speeded up, with a view to allowing visa-free travel by June
EU payments of €3bn ($3.3bn; £2.2bn) promised in October will be speeded up, with the possibility of further aid to help Turkey deal with the crisis. Turkey reportedly asked for the sum to be doubled
Preparations will be made for opening new chapters in talks on EU membership for Turkey
But liberal worries about legality are not the half of it.
The exhortation that the passport-free area should be re-established, even as new barbed wire fences were going up between Slovenia and Croatia, always seemed unrealistic. 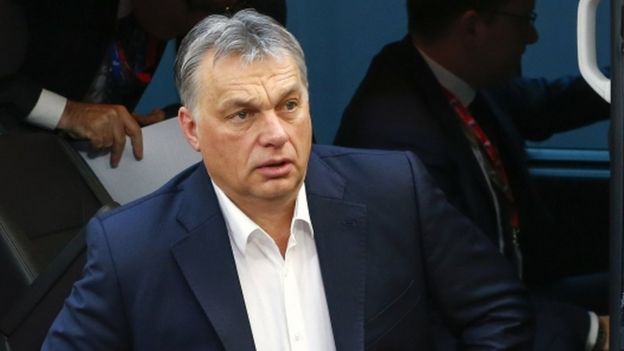 Viktor Orban has warned of a threat to Europeans' way of life
So did urging a "coalition of the willing" to take new refugees when traditionally open countries were shutting their doors.
But this is not any old agreement; it is an agreement with Turkey.
The Hungarian prime minister, echoing the rhetoric of some Brexiteers, has declared it is all a plot to create a super-state.
Viktor Orban has said: "If we want to stop the mass migration, first we must put the brakes on Brussels," adding that he would say the unsayable.
"It is forbidden to say that the arriving masses from other cultures are a threat to our way of life, our culture, our habits and our Christian traditions."
That perhaps goes to the dark heart of the problem with this deal, with its promise of visa-free travel for Turks.
Those worried by a seeming endless flow of Syrian refugees are not reassured by the idea of swapping that reality for the possibility of open access to Turkey's 75 million people and dangling eventual EU membership in front of them.
The Turks, too, are willing to work for lower wages and, in the minds of some, representatives of an alien culture.
Growing authoritarianism
Francois Hollande has proclaimed his opposition to the plan. France, like Austria, has suggested Turkey can never join.
The UK has in the past stood firm against this view. Labour and Conservative governments have championed the importance of a Muslim Nato ally that straddles Asia and Europe being bought closer into the Western fold. 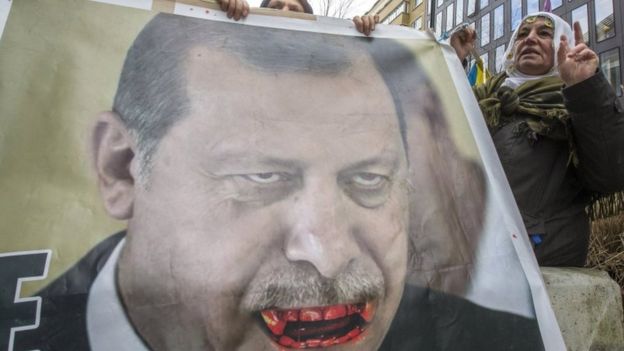 President Erdogan is becoming more authoritarian, say his critics - including Turkish Kurds protesting at their treatment
Now the danger of losing the UK's referendum on EU membership may prevent Mr Cameron making this old argument. Ironically it is the EU's continued rebuffs that have made it easier for President Erdogan to become more authoritarian and more Islamist in his politics.
But the British view is from a small island, far away from the action. The UK was never occupied by the Ottomans, as Hungary, Bulgaria, Romania, Greece and much of the Balkans once were.
The Turks were never at the gates of London as they were at Vienna.
Mock if you like, but such history is bone deep.
The EU was built to overcome deeply ingrained hostility between nations but breaking down some walls can reinforce others.
The founders of a political Europe were not explicit that this was to be a geographically limited Christian club but some of their heirs are.
It is one of the profound questions that faces the EU if it wishes to survive - whether it is defined by geography, culture or philosophy.
Cyprus question
One piece of recent history above all threatens to derail any deal.
In 1974, the same year as Enoch Powell resigned from the Tory party because, he said, Edward Heath had taken the UK into the European Economic Community without a mandate to do so, Turkey invaded Cyprus, an island that had enjoyed both Ottoman and British rule before being fractiously shared between two fiercely nationalist communities.
The island is still partitioned but the EU member state Cyprus will block any deal unless Turkey honours an agreement to recognise the island as a single country - something that seems highly unlikely. 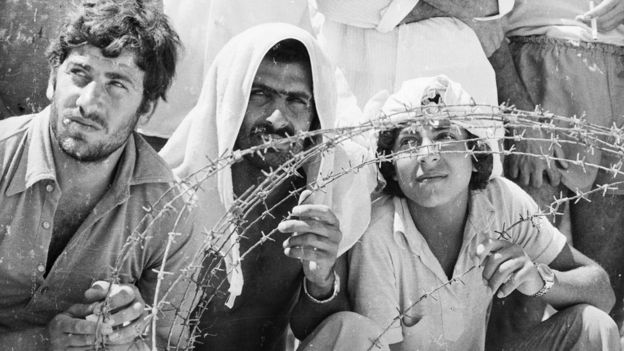 Turkey invaded Cyprus in 1974
Turkey has Europe over a barrel and might enjoy giving it a spanking after years of contempt and distain.
This newfound political clout produces an equal and opposite reaction. Its demand for more cash has been called "blackmail" by the forthright Czech president.
This is a deal that also probably needs approval by the Greek and Turkish parliaments, but don't worry about that - it isn't likely to survive much beyond the weekend.
It won't vanish. Mrs Merkel won't give up. The crisis wont fade from the headlines. The EU will find some sort of agreement, eventually.
The old metaphor for the European Union was a train, and the question was whether you were on it or not.
Nowadays it is more like being stuck in a traffic jam on a motorway, with the kids in the back moaning "Are we there yet?", the driver fulminating about the impossibility of turning round or backing out.
After Mrs Merkel's speedy breakthrough, progress will be at a snail's pace and the relationship with Turkey may be changed profoundly during the journey.