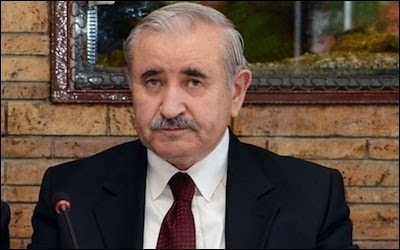 by Burak Bekdil, The Gatestone Institute
Columnist Seyfi Sahin wrote on January 31, "I believe that the gorillas and chimps living today in the forests of North Africa are cursed Jews. They are perverted humans that have mutated."
The 74th anniversary of an embarrassing tragedy took place in Turkey on February 24, 2016.

The MV Struma was a small iron-hulled ship built in 1867 as a steam-powered schooner, but was later re-engined with an unreliable second-hand diesel engine. In 1941, it was tasked with safely transporting an estimated 781 Jewish refugees from Axis-allied Romania to Britain's Mandatory Palestine. Between its departure from Constanta on the Black Sea on Dec. 12, 1941 and arrival in Istanbul on Dec. 15, the vessel's engine failed several times. On Feb. 23, 1942 with her engine still not running but the refugees aboard, Turkish authorities towed the Struma from Istanbul through the Bosporus out to the Black Sea. On the morning of Feb. 24, the Soviet submarine Shch-213 torpedoed the Struma, killing all but one of the refugees and 10 crew aboard.

Until this year Turkey, one of the main culprits, had only once commemorated the victims. This year, official Turkey decided, should be the second time. A wreath and carnations were hurled at the sea in the shadow of the horrible event that took place decades ago.

At the commemoration ceremony at Sarayburnu harbor on the Bosporus were the head of Turkey's Jewish community, Ishak Ibrahimzadeh, Chief Rabbi Isak Haleva and Istanbul's governor, Vasip Sahin. In his speech, Sahin said: "We observe that the necessary lessons were not drawn from such tragedies." He was right, at least from a Turkish point of view.

When it comes to diplomatic conflict between Turkey and Israel or Turkish anti-Semitism, there is always an unusual optimism in the official language chosen by Israeli officials or Jewish community leaders.

If Turkish Jews are 'safe and secure,' why the heavy, embassy-like security at synagogues?

For instance, Ibrahimzadeh praised "recent steps by the Turkish state to mend history with the Jewish community." Echoing the same optimism, chairman Stephen Greenberg and executive vice chairman Malcolm Hoenlein of the Conference of Presidents of Major American Jewish Organizations, assured that Turkey's small (less than 17,000-strong) Jewish community feels "safe and secure" despite being placed in the middle of a political feud between Turkey and Israel -- sparked first in 2009 by then Turkish Prime Minister Recep Tayyip Erdogan's clash with former Israeli President Shimon Peres at a World Economic Forum meeting in Davos, Switzerland.

Such optimism in official narratives is normal, especially because Ankara and Jerusalem have been privately negotiating a deal to end their hostilities and normalize their diplomatic relations. Non-constructive, let alone explosive, speeches from any state or non-state actor will not help diplomats from either side in their efforts to reconcile. All the same, facts on the ground are a little bit different than the rosy picture.

If Turkish Jews are "safe and secure" in Turkey, why do they feel compelled to protect their schools and synagogues with heavy security? Why do most synagogues in Istanbul look almost like a U.S. embassy in Baghdad or Islamabad?

On Jan. 20, 2016, a Turkish synagogue in an old Jewish neighborhood in Istanbul was vandalized with anti-Semitic graffiti days after holding its first prayer service in 65 years. Vandals painted the external walls of the Istipol Synagogue with the script: "Terrorist Israel, there is Allah."

"Writing anti-Israel speech on the wall [outside] of a synagogue is an act of anti-Semitism," said Ivo Molinas, editor-in-chief of Turkish Jewish newspaper, Şalom. "Widespread anti-Semitism in Turkey gets in the way of celebrating the richness of cultural diversity in this country."

Less than a month after that, a column in the radical Islamist Turkish daily Vahdet claimed that the evolutionary theory of "the Jew" Charles Darwin contradicts Allah's word in the Koran and that in actual fact, monkeys evolved from perverted Jews whom Allah cursed and punished.

Unsurprisingly, the columnist, Seyfi Sahin, is a staunch supporter of President Erdogan's Justice and Development Party. Sahin claims to be a physician, and argued that "Jews terrorize the world of science" and, "as a Jew, Darwin concocted his theory of evolution in order to turn Muslims away from their religion." He further wrote:

The aim of [Darwin's] theory is to turn the non-Jews away from their religion, to harm their faith, and to make them suspicious about their religion. Darwin, being a Jew, believed, lived, and was buried according to his religion. His real targets were the Muslims ... I believe that the gorillas and chimps living today in the forests of North Africa are cursed Jews. They are perverted humans that have mutated.

There are no reports of Sahin being investigated or prosecuted under Turkey's anti-racism laws. Not surprising. No such case has ever been heard of.

Islamist columnist Yusuf Kaplan, one of Turkey's most prolific purveyors of antisemitism, was himself accused by colleagues of being a "Jewish stooge" last month after he criticized government policy.
More recently, there was the curious case of Yusuf Kaplan,** a Turkish Islamist columnist and a darling of Erdogan and his supporters -- until he dared to criticize the government's foreign policy. Kaplan a columnist for Yeni Safak, one of Erdogan's favorite newspapers and one of his staunchest supporters, argued in a television appearance that the government's foreign policy was incompatible with regional realities. So what? Not so difficult to guess.

Leading users on social media called for Kaplan's death and accused him of killing another pro-government journalist, of being a British spy and of "collusion with the Jews." Many called him a "Jewish stooge." A Jewish stooge? The man has a remarkable record of making anti-Semitic statements, including his claim that "Jews rule the Western universities and world media and that their paranoia can reach barbaric, cruel and inhuman dimensions."

On the 74th anniversary of the Struma tragedy, anti-Semitism in Turkey has reached such intensity that even anti-Semitic Islamists are not immune to anti-Semitic smear campaigns.

** Kaplan means tiger in Turkish and is a popular name, unrelated to the common Jewish name.