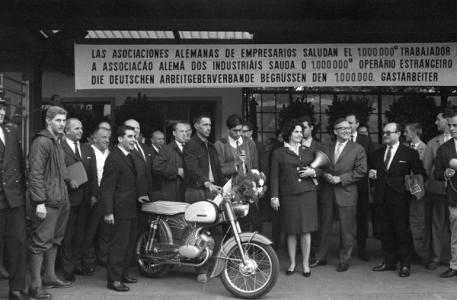 by Daniel Pipes
In 1961, the German post-war "economic miracle" (Wirtschaftswunder) was in full bloom, with a seemingly insatiable thirst for unskilled workers. After signing government-to-government bilateral agreements with Italy (in 1955), Greece (1960), and Spain (1960), Bonn turned to Ankara and on this day, Oct. 30, in 1961 signed a "Recruitment Agreement between the Federal Republic of Germany and Turkey" (Anwerbeabkommen zwischen der Bundesrepublik Deutschland und der Türkei). Little did either side realize the implications of this seemingly minor accord.

The German government set up a liaison office in Istanbul to urge unmarried male candidates to apply, which they enthusiastically did in large numbers. The agreement permitted Turks to go to work in Germany for two years, then return home. But German industry lobbied for longer residencies – the constant training to replace workers every two years took its toll – so this limitation was lifted already in 1964. Still, no one expected the Turks to stay long and their jobs did not require them to learn German, so the overwhelmingly male population lived in its own dormitories, quite isolated from the larger society. Of the 750,000 Turks who arrived under this program, about half did return to Turkey, half did not.

The boom years ended with the oil crisis of 1973-74, which closed down guest worker recruitment. Ironically, this change led to an increase in the Turkish population as workers imported wives, moved to apartments, families burgeoned, and today's heavily Turkish districts throughout (former West) Germany came into being.

A blend of the German and Turkish flags that symbolizes what has too rarely occurred.
Fifty-five years later, with unskilled laborers hardly needed and the cultural isolation proving a deep problem, the Turkish population numbers an estimated 4-5 million, making up more than 5 percent of the country's total population and by far the largest immigrant group. The 1961 agreement seems from another age entirely, yet its legacy lives on and grows unceasingly. (October 30, 2016)