Skip to main content Skip to search
Secondary menu
Home » So, Istanbul is a Greek city?

So, Istanbul is a Greek city? 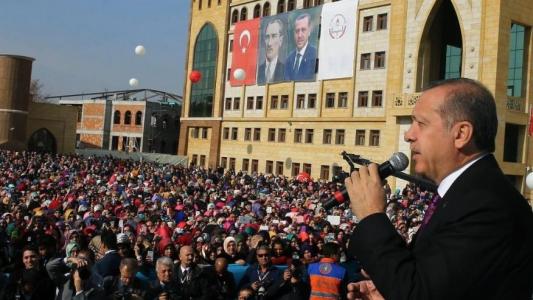 Burak Bekdil
Some observers have lately been advising foreign governments not to worry too much about Turkey’s (President Recep Tayyip Erdoğan’s) increasingly aggressive irredentist rhetoric because it is largely targeted at domestic consumption rather than addressing the relevant foreign audience. Well, yes and no.

It is true that revisionist/nationalist rhetoric sells very well in Turkey’s marketplace of ideas (and, increasingly, in other countries too). It is also true that Mr. Erdoğan’s most imminent target audience is, naturally, the average Turkish voter – the man who can most easily be captured by any irredentist rhetoric dancing around appealing nationalist claims such as “our glorious past,” “the great injustice our great nation had to suffer a century ago,” “a just need to correct the wrong flow of history,” or “we shall one day revive our fallen empire.” Add to those the “we are the ‘most devout Muslims’ rhetoric” you will not just catch a voter but a devoted fan who will be prepared to die or kill for you.

But the fact that Mr. Erdoğan’s main target group is the average Turkish voter does not change the fact that he also wholeheartedly believes in what he says, or that he could turn rhetoric into some insane action one day if he thinks, out of a moment of miscalculation, Turkey is powerful enough to “correct the wrong flow of history,” in the words of former Prime Minister Ahmet Davutoğlu.

Furthermore, fuelling such sentiment in a society well known for its xenophobia, self-isolationist mentality and a collective desire to return to the days of glory could be politically perilous in the long-term since one of Mr. Erdoğan’s 18-year-old “soldiers” today will probably become the Turkish leader in a few decades – another and angrier Mr. Erdoğan.

More importantly, Mr. Erdoğan’s rhetoric does not only lack the simplest norm of logic but is also inconsistent. Forget his latest irredentist speech that supposed Turkey today could have had 3.5 million to 4 million square kilometers of land instead of its 780,000 square kilometers. It could have. But it does not. Why, in the Islamist mind, does size matter? Is Turkey, by any credible international criteria, a better country than, say, Switzerland – which sits on 41,000 square kilometers, or 5 percent of Turkish land?

In the same speech, Mr. Erdoğan mentioned the Greek islands in the Aegean Sea. “Those islands under our nose were ours,” he said. “[In those islands] there are our monuments, our history, our mosques…” This is true. But applying the same logic to what is today Turkey can result in claims which Mr. Erdoğan will certainly not like.

If “having places of worship, history and monuments [from the past]” in foreign countries should give other countries the right to claim territory, we Turks would all have to pack up and endure the hardships of a long journey into some faraway steppes. Forget the countless monumental and historical marks on Anatolian lands that belong to pre-Turkish times, just note the fact that, firstly, the GreekOrthodox patriarchal basilica in Istanbul which Mr. Erdoğan’s fans so passionately want to convert into a mosque, was built in 537 AD, or 816 years before the first mosque in the city was built, and secondly, since Mr. Erdoğan often talks about Turkey’s “2071 targets,” in reference to the year 1071 which marks Turks’ capture of parts of Anatolia, he admits that there were non-Turkish civilizations, places of worship and history on the lands that is today Turkey.

Mr. Erdoğan claims he is lecturing everyone in history. He should first of all himself acknowledge that history did not begin in 1071 or 1453.
http://www.hurriyetdailynews.com/so-istanbul-is-a-greek-city.aspx?pageID=449&nID=105710&NewsCatID=398