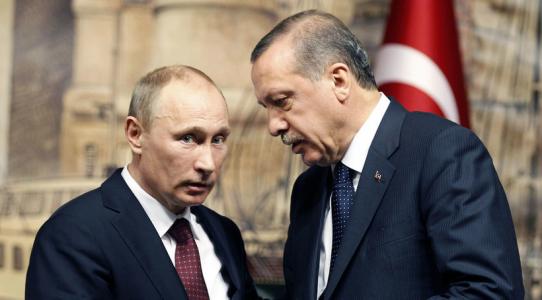 REUTERS
Mahir Zeynalov
Turkish journalist and analyst
This post is hosted on the Huffington Post’s Contributor platform. Contributors control their own work and post freely to our site. If you need to flag this entry as abusive, send us an email.
“We all saw who our friends and enemies are,” Turkish president said after the failed coup attempt. He is referring to Russia.

Anti-American sentiments were always high among skeptical Turks. But this is the first time that the anti-American campaign is encouraged and fed by the government. President Recep Tayyip Erdogan’s adviser Burhan Kuzu usually includes profanity in his tweets to slam the U.S., while ministers constantly question whether or not the U.S. is a friend or foe.

Overwhelming majority of Erdogan’s fan base believes that their number one enemy, the Gulenists, are a project created and funded by the CIA. Turkish media is awash with claims that the U.S. is deliberately harboring Gulen. It is not only Islamists who vent their anger against the U.S., but also secular ultra-nationalists. Dursun Cicek, an opposition lawmaker and an ultranationalist, claimed last month that the Gulen movement, the PKK and ISIS are used by the West against Turkey.

Turkish foreign minister Mevlut Cavusoglu told a Russian TV this week that the Turkish public view the U.S. negatively and will continue to do so unless they extradite a Muslim cleric blamed for masterminding the coup attempt. “Russia showed us that they’re a real friend as they displayed solidarity at our most difficult time,” the foreign minister said.

Vladimir Putin, however, is a good friend of Erdogan. Turkish president frequently calls him “değerli dostum” — my valuable friend — and praises his unwavering support in the face of the coup attempt on July 15. Erdogan and his inner circle know very well that Putin will not question them if Erdogan burns the country to the ground. He does not lecture Ankara about its human rights violations or press crackdown. While the West reluctantly condemned the July 15 coup, Russia was first to call Erdogan and show his solidarity.

Since the coup attempt, Erdogan and Putin talked on the phone for 4 times and met in person for 3 times. Turkish army and spy chiefs were in Moscow this week. Russian army chief also visited Turkey in August, 1st such a visit in 11 years.

This honeymoon has started as the Turkish president was preparing to undermine the coup in the making. Russia was key in thwarting the coup attempt. This is how things unfolded:

Usually, a group of colonels and generals form a junta, draft plans for a coup and convince the military establishment to get on board (if a coup is not engineered by the military establishment itself). Army generals do not usually stage a coup plot unless they get everyone on board. To prove this point, former army chief Ilker Basbug told a parliamentary commission on Wednesday that the coup attempt failed because the army establishment did not participate. Erdogan knew very well that the key to thwart a coup attempt was to make sure that not everyone would join the coup.

As part of his plan to undermine the coup, there was one group that Erdogan could strike an alliance — the Perincek Group. This pro-Russian group has vast followers in the military and the bureaucracy. To secure their support, Erdogan wrote a letter to Putin two weeks before the coup and apologized for shooting down the Russian jet.

When that night came, the Perincek Group said they would not be the part of the coup plot. With their withdrawal, the entire plan fell apart. To act as if they know nothing, most force commanders went to a wedding as the coup unfolded. Bulent Bostanoglu, Navy Force Commander, said he learned about the coup attempt at 22:23 when he was at the wedding, almost one hour after the entire Turkey knew. In addition, the military said they knew about the rebellion at 4 p.m. on that day, 6 hours before the coup. Why would army’s one of top commanders go to a wedding party if there is a life-and-death situation in the army? More questions than answers.

It was then clear that Perincek Group undermined the coup attempt, forcing the military establishment to withdraw their support. Some commanders might have tried to convince the army chief, Hulusi Akar, to go ahead without the Perincek Group. But eventually, the army chief and forces commanders refused to participate.

In the meantime, out of nowhere, several tanks were rolled into streets and F-16s took off to bomb the Parliament and occupy a bridge. Why would coup plotters occupy a bridge or bomb a national assembly instead of cutting off the Internet, arrest politicians and impose a curfew — COUP 101? Military generals are not that stupid not to know that they cannot effectively stage a coup if the entire military does not support them. These are the questions that need to be addressed.

Erdogan knows that without the pro-Russian group in the Turkish military, the coup could’ve well been successful. And he knows that the West, now, is a bigger threat to his authority than his buddy Putin.