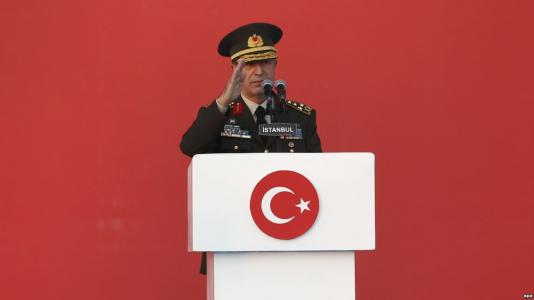 Officials in Moscow say Russia and Turkey are resuming military cooperation and plan to hold a meeting of an intergovernmental commission before the end of 2016.

Aleksandr Fomin, the head of Russia’s Federal Service for Military-Technical Cooperation, said on November 7 that the dates and venue of the meeting are under negotiation.

He said the issue of sending Russian-built antiaircraft systems to NATO-member Turkey also could be discussed by the commission.

Fomin’s remarks follow a visit to Moscow on November 1 by the head of the Turkish armed forces’ General Staff, General Hulusi Akar.

Turkey says Akar and his Russian counterpart, General Valery Gerasimov, discussed potential military cooperation in Syria against Islamic State militants, as well as in other areas.

Relations between Ankara and Moscow deteriorated after a Turkish warplane in October 2015 shot down a Russian fighter plane near Turkey's border with Syria.

But ties have improved since an attempted coup in July by Turkey's military against President Recep Tayyip Erdogan.

Meanwhile, Ankara’s relations with its NATO allies have been tested by criticism from NATO states about Erdogan’s crackdown against his political opponents since the failed coup.

Based on reporting by Interfax, TASS, Reuters, and RIA