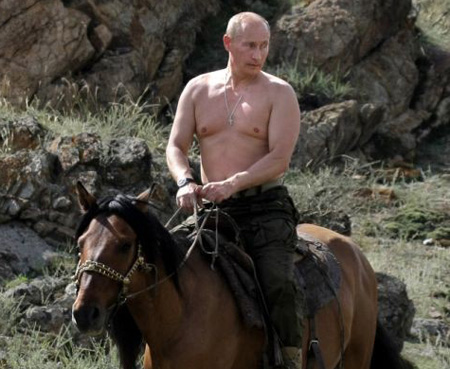 Christmas came early for Mikhail Khodorkovsky, Greenpeace activists and Pussy Riot punk rock members — all released from jail in December as a gift from Russian President Vladimir Putin. But there is more behind Putin’s surprise move than festive good cheer.

On the international stage, 2013 was a good year for Putin. He scored diplomatic victories on Syria, the Edward Snowden affair and, most recently, the Ukraine, whose President Viktor Yanukovych presented his country as a gift to Putin, after a brief flirtation with the European Union. Domestically, however, 2013 was a more challenging year for Putin and his retinue.

As Putin marks the 14th anniversary of his first arrival in the Kremlin this month, he is finding Russia increasingly difficult to govern. The Kremlin’s dismay at the scale and longevity of protests in Moscow and other cities, following the fraudulent election in December 2011, is forcing Putin to find new ways to shore up his presidency.

The pardoning of former Yukos boss Mikhail Khodorkovsky is part of this reinvention, allowing Putin to demonstrate his humanitarianism to Russia’s liberal middle classes, while simultaneously confirming his continuing omnipresence to his political opponents.

But Putin’s PR stunt will do little to stabilize his regime. Although anti-government protests have mostly dissipated, the underlying causes of unrest and instability remain.

• First, Putin’s government is losing its legitimacy among Russia’s middle classes. In the 1990s, most protests took place outside of Moscow. But since 2007, protests in the capital have been increasing, and are being led by Russia’s growing urban middle class. Protests against election fraud in December 2011 were the biggest in Moscow since the collapse of the Soviet Union in 1991. In presidential elections held in March 2012, Putin lost majority support in major cities across Russia.

Liberal opposition candidate Mikhail Prokhorov won approximately 20 percent of the vote in the Russian capital. In the Moscow Mayoral race in September 2013, anti-corruption campaigner and opposition activist Alexei Navalny received just over 27 percent of votes cast, with no access to television, and with the full might of the regime against him.

Although the Russian opposition is still weak and disunited, for the first time in a decade there is an alternative to Putin.

The Kremlin may remain stronger than civil society, but it can no longer ignore it. Russia’s middle classes want the political and civil rights to match their economic freedom. The experience of similar bourgeois movements in Latin America and South East Asia suggest these demands cannot easily be ignored.

• Second, the Kremlin is losing its monopoly on information and communication. Government control over television remains firm, but television no longer dominates the Russian media landscape as it did in the early 2000s.

Across Russia, just over 50 percent of voters have regular access to the Internet, which remains largely uncensored by the state. In major cities, Internet access rises to above 70 percent for all age groups, and to almost 100 percent for people under 40.

Social media and online news are key organizational and information resources for young urban voters who are the mainstay of protests against the regime.

Too young to remember the Yeltsin years, the Internet generation largely ignores or rejects government propaganda on state-controlled television that warns of a return to the upheaval of the 1990s as the inevitable consequence of the collapse of the current regime.

• Third, poor economic conditions are curtailing state paternalism and limiting kickbacks to the Putin regime’s political base. Consequently certain business and bureaucratic factions are beginning to question the Kremlin’s ability to protect their economic interests. During the global financial crisis of 2008-2009, Russia’s GDP declined more than that of any other industrialized nation.

Economic recovery has been slow. Growth has dropped or remained unchanged in every quarter since Putin won a third presidential term in March 2012. In the third quarter of 2013, Russian economic growth was an abysmal 1.2 percent.

In December, the International Monetary Fund downgraded its 2014 Russian growth forecast from 3 to 2 percent, warning that negligible growth was likely to continue for years to come.

Unless the Russian government undertakes radical reforms to privatize state-controlled enterprises, modernize infrastructure, increase access to finance, and improve transparency, it will be unable to attract the investment it needs to avoid economic stagnation.

Although Putin has acknowledged the domestic causes of Russia’s economic woes, it remains to be seen whether he can overcome the widespread business and bureaucratic inertia that poses the main obstacle to reform. Failure to revitalize the economy could present Putin with his greatest challenge yet.

Much of his popularity rests on the significant improvement in living standards since he first became president in 2000. The legitimacy of the Putin’s regime is predicated on its delivery of economic goods. If living standards start to decline, voters could quickly withdraw their support.

Although far from dead, the Putin regime is clearly losing its legitimacy. The urban middle classes may be beyond reconciliation with the Kremlin,

but modest political and economic reforms would likely prevent discontent growing into crisis.

For the time being, economic slowdown has not trickled down to the real economy. Unemployment and wages remain stable, providing the Kremlin with breathing room to introduce reforms.

The Putin regime may not be in its final stages, but its demise has clearly begun. The key legitimizing factor of the regime — Putin himself — is seeing his approval decline. Sixty percent of Russians don’t want him to run for a fourth presidential term in 2018.

Putin’s response to his current challenges over the next 12 months will determine the nature of his eventual departure, and the nature of the system that comes after him.