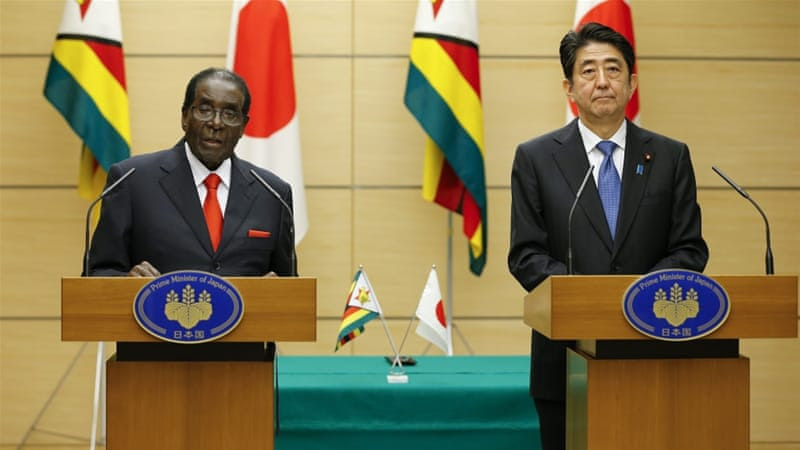 Zimbabwe remains under a number of sanctions from the US and some European countries, which have repeatedly called out Zimbabwe for its record on human rights issues. The hosting of Mugabe reveals the duelling pressures that face Japan as it looks to engage more states in Africa while still maintaining its image as a democratic state that promotes a rules-based order.

During the summit, Abe focused efforts on securing Mugabe's support for Japan's policy of reforming the United Nations Security Council (UNSC) to include more permanent members.

Mugabe and Abe agreed that the UNSC "does not fully reflect the realities of the international community in the 21st century" (PDF). Tokyo has long held the belief that this reform is necessary and that the current Permanent Five structure is out of touch with current geopolitical realities (PDF).

Japan's efforts over the years to lobby for its inclusion in an expanded permanent Security Council have resulted in Tokyo casting a wide diplomatic net in Africa, where numerous countries support UNSC reform.

Tokyo also took the opportunity to explain its new security legislation - enacted last month - and its policy of a "proactive contribution to peace". Japan highlighted its role in Africa as an example of this - for example its contributions to peacekeeping operations in South Sudan.

Tokyo's contribution in South Sudan, where it has deployed more than 400 Self-Defense Forces (SDF), is operating under the umbrella of the UN Mission in the Republic of South Sudan.

Abe and Mugabe also agreed to a package of investment and assistance projects that Japan would provide Zimbabwe in the coming years, including $5m dedicated to infrastructure improvement as well as continuing a $15m project on irrigation enhancement.

Despite these announcements, Japan's ties with Zimbabwe remain quite limited and don't rival those of China. Indeed, Mugabe was given the title of "old friend" by Chinese President Xi Jinping during his last visit to China in 2014.

China also has invested billions of dollars in Zimbabwe's energy and infrastructure sectors. Meanwhile, Zimbabwe endeared itself to Beijing by adopting the Chinese yuan as its international currency last year - becoming the first country in the world to do so.

Therefore, Abe's eagerness to court Harare is motivated less by replacing Chinese influence and more through providing an option of diversification in Asia and weakening Beijing's monopoly.

While Abe did visit Africa (Ethiopia, Mozambique and Ivory Coast) in 2014, his engagement with the continent has not been as strong as similar outreach in Asia, Europe and the Middle East.

Over the past five years, Tokyo has been averaging more than $4bn in foreign direct investment to Africa. This number is steadily climbing, but still pales in comparison to what other Organization for Economic Cooperation and Development (OECD) countries have invested there, and is just a fraction of the $16bn that China had invested by the end of 2011.

Simply put, Japan is still in the backseat with regard to engagement with the continent as China continues to pour billions across Africa.

A renewed focus now should take a more holistic and diverse look at engaging with the continent encompassing development assistance, investment opportunities and stronger political-security cooperation.

There are 49 countries in Sub-Saharan Africa through which Japan has been looking to enhance relationships with to gain support in international bodies, such as the UN. Japan should also look to leverage this year's Sixth Tokyo International Conference on African Development (TICAD) - a very successful forum through which Japan has solidified its reputation in Africa.

But aside from UNSC reform and economic competition with China, there are other important drivers for stronger ties, including the growth of violent extremism in North and West Africa, highlighted by the sustained challenge of Boko Haram and al-Qaeda along with the more recent emergence of the Islamic State of Iraq and the Levant (ISIL, also known as ISIS) in Libya.

There is also the threat of piracy around the Horn of Africa and Japan's deployment of SDF in Djibouti to take part in a multilateral policing action there to mitigate those threats. Security issues in Africa are no longer strictly peripheral for Tokyo.

In sum, Japan's strategic interests in Africa are diverse. Despite this, Tokyo should not play the game of jostling and one-upmanship with China in Africa, but rather accentuate its strengths and continue the current diplomatic uptick which aligns with the continent's growth in the coming years.