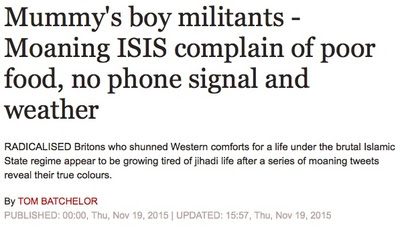 That the Islamic State (also known as ISIS, ISIL, or Daesh) will be gone is predictable because all totalitarian states eventually disappear due to three main developments: cadres become disillusioned, subject populations suffer, and external enemies increase in number. All these problems afflicted, for example, the fascist states of World War II as well as the Soviet bloc.

ISIS will collapse quickly because it suffers from an extreme form of these problems.

Disillusioned cadres: The heaven-on-earth ISIS promises its adepts turns out to be closer to hell, prompting many recruits to flee and many more to want to. Growing numbers of ISIS fighters lack loyalty to the group, toiling only for the money or out of fear. The reasons can be as mundane as bad food and as elevated as bad theology, but grievous disappointment is the common theme coming from the ranks of ISIS members. Radical ideologues evolve into penitents; drug-addled fighters end up as near-vegetables.

Britain's Express newspaper reports on ISIS moaning.
Suffering subject population: ISIS oppresses the unfortunate millions who live under its rule in a territory about as large as Great Britain. If a few benefit from the system, the great majority suffer from the petty interference, impoverishment, arbitrary rules, brutality, and sadism that characterize ISIS dominion. These subject people will rebel whenever the opportunity arises.

Foreign enemies: ISIS seems to take pride in making as many enemies as possible, which may burnish its credentials for purity but leaves it exceedingly vulnerable. It gratuitously alienated Jordanians by burning alive an air force pilot; it enraged Turks by setting off bombs in major cities; its acts of violence in Paris, Brussels, and beyond have made it enemy #1 in much of the West (including even the Islamists living there); it alienates everyone with the destruction of antiquities, the use of poison gas, and the videotaped beheadings. Its only alliances are with like-minded groups such as Boko Haram in Nigeria.

As a result, ISIS has become uniquely reviled. For example, in an unprecedented meeting, the U.N. Security Council in December 2015 voted unanimously to impose far-reaching economic sanctions on ISIS. On another level, a recent large-scale survey found half of 18 to 24-year-old Arabic-speakers saying that ISIS is the "biggest obstacle facing the Middle East," more so than unemployment, Israel, or Iran.

From the ASDA'A Burson-Marsteller Arab Youth Survey 2016.
In all, ISIS is losing personnel (25,000 killed, according to a U.S. source) as well as economic power and territory. Leaders are escaping to the friendlier confines of Libya. Deserters are revealing files with contact information of ISIS members. Bombings by many air forces combined with Kurd- and Baghdad-backed efforts are taking their toll on ISIS, especially on its finances. In 2015, ISIS lost Baiji, Kobani, Sinjar, and Tikrit, amounting to 20 percent of its territory in Syria and 40 percent in Iraq. These loses continued into 2016, with Ramadi and Palmyra already spun out of its control. An Egyptian analyst, Abdel-Moneim Said, compares ISIS now to the last, desperate and doomed year of the Nazi Reich.

But if the ISIS state in Syria and Iraq is doomed, ISIS will live on in other ways. First is the successor state in Libya and perhaps also others in Nigeria, Somalia, Afghanistan, and beyond. Second is the very idea of the caliphate, a medieval concept of Muslim supremacism that has malign implications for modern life.

So, let us hasten to bring about and then celebrate the forthcoming demise of the Islamic State centered in Raqqa, Syria, without deluding ourselves that ISIS is entirely finished. To achieve that requires, unfortunately, defeating and marginalizing the entire Islamist movement. That too may happen, but is many years off.