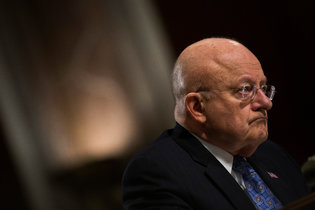 James R. Clapper Jr., the director of national intelligence, in February in Washington. When asked on Monday if the Islamic State was engaging in secret activities in in Britain, Germany and Italy, he said, “Yes, they do. That is a concern, obviously, of ours and our European allies.” Credit Drew Angerer for The New York Times

WASHINGTON — The Islamic State is operating clandestine terrorist cells in Britain, Germany and Italy, similar to the groups that carried out the attacks in Paris and Brussels, the top-ranking American intelligence official said on Monday.

When asked if the Islamic State was engaging in secret activities in those nations, the official, James R. Clapper Jr., the director of national intelligence, said: “Yes, they do. That is a concern, obviously, of ours and our European allies.” He then added, “We continue to see evidence of plotting on the part of ISIL in the countries you named.” ISIL is another name for the Islamic State.

Mr. Clapper, speaking to reporters at a breakfast meeting organized by The Christian Science Monitor, became one of the most senior Western officials to publicly acknowledge the Islamic State’s extensive reach into Europe, which has set off growing fears among American and European spy services and policy makers. The Islamic State has vowed to conduct attacks in those three European countries.

Western experts, however, emphasize that it is impossible to know where the next attack might take place.

Spurred by the Paris attacks in November and the assaults in Brussels last month, the United States has rushed to provide allies with intelligence from a variety of technical and human sources, as well as to offer long-term structural fixes to the Europeans’ failure to share intelligence effectively and to tighten porous borders.

Two weeks ago, Mr. Clapper led a group of American intelligence officials who met in Germany with their European counterparts in what he said was an effort “to promote more sharing between and among the nations in Europe.”

“That, right now, is a major emphasis of ours,” he added.

Many European nations still refuse to share basic intelligence, even within a government, leading to blind spots across the Continent that make it easier for terrorist groups to strike. Brussels has more than a dozen police forces, and French intelligence, police and judicial officials do not routinely share terrorism information, American intelligence and counterterrorism officials said.

Like Mr. Clapper, counterterrorism officials in Europe say they have indications from multiple sources that Britain, Germany and Italy, and perhaps more countries, are in the sights of the Islamic State’s European networks.

The information comes from the Islamic State itself, which often signals its intentions, as well as from information gleaned from questioning suspects in plots that have been carried out or stopped, and from intercepts of telephone and cybercommunications. Those communications, however, are hard to penetrate because the Islamic State has proved capable of covering its virtual tracks, according to European investigators.

Claude Moniquet, a former French intelligence officer who closely follows terrorism, said the British and Germans were especially concerned about the possibility of an Islamic State strike.

That would be true as well of the French and Belgians, whose intelligence services believe that both countries could be hit again. One of the figures involved in the attacks in both Brussels and Paris, Mohammed Abrini, was reported to have told investigators that the Islamic State was considering attacks during the European Cup soccer tournament in June, which will be played in 10 stadiums throughout France.

While the Islamic State says that it targets countries that are bombing its fighters in Syria and Iraq, in reality its targets seem to be based on a number of factors. One is pragmatic, Mr. Moniquet said: How many operatives does it have on hand in a country?

The European countries with the most residents either fighting in Syria or Iraq, planning to go to fight or having returned from the fight are France, with about 1,800 to 1,850; Germany and Britain, each with roughly 750 to 800; and Belgium, with 450, according to estimates by those countries’ governments and counts by outside intelligence consultants such as the Soufan Group in New York.

It is not clear how many of these fighters have returned to Europe, since many carry European passports and are free to come and go. But intelligence officials estimate that 20 percent to 30 percent have returned.

Abdelhamid Abaaoud, the on-the-ground leader of the Paris attacks, told a relative that he had brought 90 fighters back from Syria to fight on European soil. While that may be an exaggeration, at least 19 people played significant roles in either the Paris or Brussels attacks, and most had fought in Syria. Another 24 men have been charged with helping the main attackers, and at least a couple of those with smaller roles also appear to have been to Syria, suggesting that Mr. Abaaoud’s boast was not altogether false.

Italy’s appearance on the list of countries that the Islamic State might plan to attack is harder to explain, since it has fewer fighters in the Middle East, but “it is very often mentioned as a potential target,” said Nathalie Goulet, a member of the French Senate, who helped lead a committee studying European foreign fighters.

Ms. Goulet said that one hypothesis is that Italy might be a target because it is the home of the pope, the most visible Christian leader. She also noted that the pope had declared this a Jubilee year dedicated to helping people in need.

However, the potential threat to Britain is mentioned most often. Mr. Moniquet said he had found statements on the Internet published in French the same day as the Brussels attacks by the Al Wafaa Foundation, a media organization close to Islamic State officials, in which its writer promised that the Islamic State would bring its violence to Britain.

“I am addressing this article to David Cameron, the pig of the crossbearers; he should not believe that the attacks aimed at Brussels and at Paris will not reach London,” the Al Wafaa writer said.

“Soon, the soldiers of the caliphate will besiege England,” said the writer, adding, “Even before America.”

British counterterrorism officials say that the authorities there have thwarted seven terrorist plots in the past 18 months or so.

It is far from clear whether the Islamic State would be able to pull off an attack in Britain, but investigators in the Paris attacks have said that they found photographs of British sites on a phone belonging to Mr. Abaaoud. They have also said that one of the logistical planners for the Paris and Brussels attacks, Mohammed Abrini, was in Britain last year.

Eric Schmitt reported from Washington, and Alissa J. Rubin from Paris and Brussels.