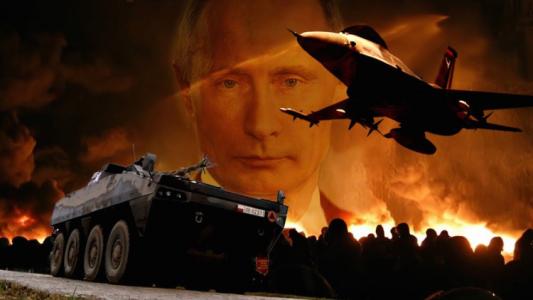 1. A UN report orchestrated by Washington has accused Syria and Russia of war crimes in Aleppo. According to the report,

“indiscriminate airstrikes across the eastern part of the city by Government forces and their allies [Russia] are responsible for the overwhelming majority of civilian casualties. These violations constitute war crimes. And if knowingly committed as part of a widespread or systematic attack directed against civilians, they constitute crimes against humanity.”

The UN Human Rights Council has now voted to start an “independent” investigation. The purpose of the investigation is to indict Russia and Putin as war criminals and to “bring to justice those responsible for the alleged abuses.” Moreover,

“the situation should be urgently referred to the International Criminal Court. Every party to this conflict must know that they will be held accountable for the international crimes they commit – all, without selective protection or discrimination.”

Keep in mind that Washington provides the largest share of the UN’s budget, and the UN will overlook that it was Washington that sent ISIS to Aleppo.

Obviously, neither Washington nor the UN will be able to drag Putin into the International Criminal Court, but a war criminal charge can serve Washington’s purpose by stopping Putin from traveling abroad and curtailing his diplomatic efforts.

The purpose of this orchestrated exercise is its propaganda value.

Among Washington’s many concerns is that some Eastern European countries, alarmed by the conflict that Washington is leading them into with Russia, will threaten NATO with a non-participation statement. If Russia is branded a war criminal, it becomes even more difficult for countries that foolishly and thoughtlessly joined NATO to extricate themselves from the consequences.

2. Washington has succeeded in bringing to power in Poland the far right-wing Law and Justice Party. These agents of Washington have re-opened the matter of the death of Poland’s President Kaczynski in a plane crash, making wild claims that the crash was a terror attack by Russia aimed at depriving Poland of its political leadership

Despite massive and convincing evidence to the contrary, the Law and Justice Party’s claims will find traction thanks to the scary portrait of Russia painted by Washington’s demonization campaign. The intended result is to further blacken and isolate Russia and its government.

3. As the anointed spokesperson for the neoconservative warmongers, Hillary wants Washington to enforce a no-fly zone in Syria. A no-fly zone would require Washington to attemp to prevent Syrian and Russian air strikes against ISIS positions. It seems clear enough that Syria and Russia would not accept any attempt to deny Syria the use of the country’s own airspace in the conflict against forces sent by Washington to overthrow the Syrian government, as happened to Gaddafi in Libya. Unless Russia and Syria surrender, Hillary’s no-fly zone would result in military conflict between Russia and the US.

To advance the no-fly zone proposal, the “use of chemical weapons” ruse has been resurrected. Fabricated reports are appearing that the Syrian airforce is guilty of dropping chemical weapons on the Syrian population. On October 22, the Indian Express reported that on October 21 the UN-Led Joint Investigative Mechanism informed the UN Security Council that the chemical attack on Qmenas

“was caused by a Syrian Arab Armed Forces helicopter dropping a device from a high altitude which hit the ground and released the toxic substance that affected the population.”

The report concluded that three of the chemical attacks investigated were made by Syria and one by the Islamic State.

The fact that the Russians resolved the chemical weapons issue in 2014, a year before the alleged attack on Qmenas, by taking possession of the weapons and removing them from Syria means that the report has little credibility.

However, at no time during Washington’s 15-year-old attack on Muslim countries have facts played any role, and certainly facts have played no role in Washington’s demonization of Russia.

4. Diana Johnstone has concluded that Hillary intends regime change for Russia and will use the presidency for that purpose.

It is impossible to imagine a purpose more reckless and irresponsible. Many members of the Russian government have stated that Washington’s provocation and demonization of Russia have brought trust between the nuclear powers close to zero and that Russia will never again fight a war on her own territory. Sergey Karaganov told the German news magazine, Der Spiegal, that if Washington and NATO move from provocations to encroachments against Russia, a nuclear power, they will be punished.

Many foolish people believe that nuclear war cannot happen, because there can be no winner.

However, the American war planners, who elevated US nuclear weapons from a retaliatory role to a pre-emptive first strike function, obviously do not agree that nuclear war cannot be won. If nuclear war is believed to be unwinable, there is no point in a war doctrine that assigns the weapons the role of surprise attack.

The Russians are aware and disturbed that Washington has made the situation between the US and Russia more dangerous than during the Cold War. Vladimir Putin himself has stated that the West does not hear his warnings. In an effort to avoid war, Putin wrings everything possible out of diplomacy. He enters into agreements with Washington that he must know will not be kept.

Washington clearly intends to use Russia’s military and diplomatic assistance to Syria to convict Russia in world public opinion of war crimes. It was Russia’s hesitancy in Syria that enabled Washington to recover from the defeat of its ISIS mercenaries and substitute control of the explanation for defeat on the ground.

Russia’s air assault on ISIS in Syria caught Washington off guard and quickly rolled up the Washington-supported ISIS forces, completely reversing the tide of war. Had Russia finished the job, Syria would have been cleared of hostile forces before Washington could catch its breath.

Instead, pressured by the Atlanticist Integrationist element in the Russian elite, the Russian government withdrew, announcing mission accomplished and relying on the Syrian Army to complete the job. This strategic error allowed Washington not merely to replenish the ISIS munitions that had been destroyed and to muster more mercenaries, but more importantly to come up with a plan for Russia’s and Assad’s undoing.

By the time that the Russian government realized that early withdrawal was a mistake and re-entered the conflict, Washington had decided that if Dasmacus could not be “liberated,” Syria could be partitioned and pressure kept on Assad in that way. Yet the Russian government continued to postpone victory by cease fire agreements that Washington used to rearm ISIS and as propaganda weapons against Russia.

Whatever the outcome of the military conflict in Syria, Russia faces a war criminal conviction by the Western media, if not by the UN Human Rights Council, and a no-fly zone in Syria if Hillary becomes president of the US.

This is the huge cost that Putin paid for listening to the unrealistic, American-worshipping Atlanticist Integrationists who are determined that Russia be accepted by the West even if it means being a semi-vassal.

Dr. Paul Craig Roberts editor of was Assistant Secretary of the Treasury for Economic Policy and associate the Wall Street Journal. He was columnist for Business Week, Scripps Howard News Service, and Creators Syndicate. He has had many university appointments. His internet columns have attracted a worldwide following. Roberts' latest books are Dissolution of The Failure of Laissez Faire Capitalism and Economic the West, How America Was Lost, and The Neoconservative Threat to World Order.